UBC Geography is firmly committed to creating a fair and equitable place to work, study and research.

UBC Geography is deeply committed to promoting, supporting, and sustaining a welcoming and inclusive community of faculty, staff, and students.

Equity and justice are central to the courses that we teach, and to creating the kind of world in which we want to live, work and learn. We recognize that structural inequalities persist in academia, within the discipline of geography itself, and in daily life in the settler colonial state of Canada. Our role is to confront, in ourselves and each other, the factors that continue to restrict full and equal participation in Canadian society, and in the academic world. We commit to learning from all members of our community in pursuit of this aim.

As part of this commitment, we have an Equity & Diversity Committee whose role is to foster and maintain an inclusive, open departmental culture; to develop initiatives in support of diversity, equity, and inclusion; and to provide a forum wherein faculty, staff, and students can discuss the wider role of academia in promoting more just and equitable societies.

We greatly value the plurality of identities, experiences, cultures and perspectives that make up UBC Geography. They are our greatest strength. We recognize that diversity in our community is multifaceted, including but not limited to: racial and cultural identity, Indigeneity, gender diversity, sexuality, disability, health status, neurodiversity, age, body diversity, nationality, immigration status, religion and socioeconomic background.

All members of our community have an individual, shared and collective responsibility to actively support equity and inclusion, and to reject discrimination of any kind.

We stand in solidarity with the Black community and the many movements dedicated to combating systemic racism and institutionalized violence.

A collection of work by Black geographers that we should all be drawing from for regular recommended reading.

As a community, we cannot fail to act on the current climate crisis. In 2019, we declared a climate emergency.

Our UBC Geography Climate Action Plan runs from 2020 – 2021, and highlights key actions we plan to take in the areas of teaching, research, advocacy and the use of our buildings.

The origins of the UBC Department of Geography go back to the establishment of the Department of Geology and Mineralogy in 1915. A half-year course in Physical Geography, given in the fall of 1915, has become, in the form of the year-long Geography 101, the oldest continuing geography course in any Canadian university.

In 1922-23, the name of the Department was changed to Geology and Geography, and UBC became the first Canadian university to have Geography as an academic division. The faculty consisted of three full-time members. 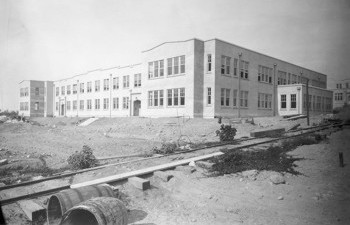 Construction of the “temporary” Geography Building circa 1925.

When the University of British Columbia moved to its present Point Grey site in the fall of 1925, the Department of Geology and Geography was placed in a “temporary” building. That building is the present UBC Geography Building, completely rebuilt inside during the late 1970s, and still standing after almost 100 years.

In the fall of 1946, J. Lewis Robinson was appointed to organize and expand the Geography program at UBC. Robinson was the first PhD in Geography to be appointed at UBC. He was joined by John Chapman, from Oxford University, in 1947, and J. Ross Mackay, from McGill University, in 1949 to lead the Geography programs at UBC. In the 1947-48 session, the department offered 12 Geography courses with a total enrollment of 750 students. A graduate program was then started in 1947 and the first Honours students in Geography graduated in 1948.

In 1959, Robinson became the first Head of the newly defined Department of Geography. In the next decade, undergraduate enrolment in Geography courses became the largest in any Canadian university. Additionally, graduate students in residence increased from 14 to 33 between 1960 and 1965.

As enrolment grew, so did the programs that were offered. In 1962, a PhD program in Geography was introduced. 1972 saw the introduction of a new BSc program in physical geography which was followed by a MSc Physical Geography program in 1975. Then in 1988, the Atmospheric Science program (sponsored cooperatively by the Departments of Oceanography and Geography) was initiated.

The faculty increased steadily during the 1970s, to a total of 23; by the end of the decade there were 81 undergraduate and 28 graduate courses in Geography, 50 graduating BA Majors and 10 graduating BSc Majors and Honours students, over 50 graduate students in residence, and a total student enrolment of over 2,000.

During the 1980s the number of students exceeded 3,000 and the number of permanent, full-time faculty increased to 25.5. The new faculty in part were appointed as a result of the Department’s success in being awarded two new programs from the Provincial Funds for Excellence in Education, in Atmospheric Science and the Geography of Japan.

Today, the Department contains between 4,000 and 4,500 undergraduates and supervises about 80 graduate students. An external review of the Department in 2000 judged it the top all-round Geography Department in Canada, and comparable to the top five programs in the United States and Great Britain.

On this page
Back to toparrow_upward