On the ground at COP26: A Q&A with UBC delegate Max Cohen 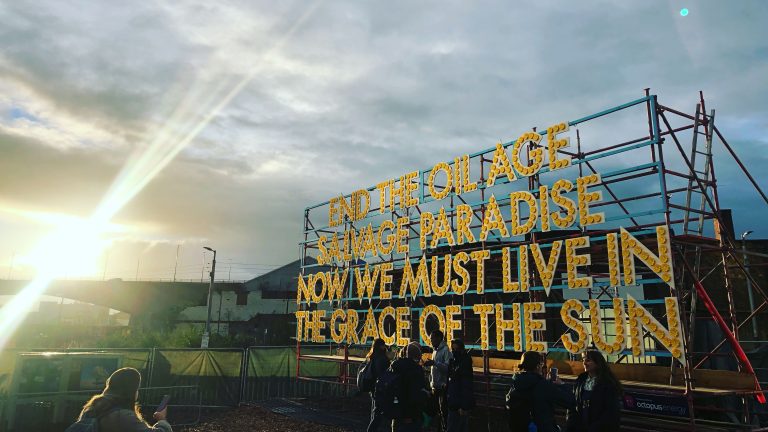 Geography PhD candidate Max Cohen was recently selected to join the UBC delegation at the COP26 climate conference in Glasgow.

Holly Denson-Camp caught up with Max on day 12 of the conference to get a feel for his experiences as a delegate. Holly is an undergraduate student and project assistant for the department’s Climate Action Committee.

Holly: Max, do you want to introduce yourself a little bit?

Max: I’m a PhD student in geography, and originally from Glasgow, so I’ve come back for COP26.

My research is on the just transition in Scotland and New Zealand. Both countries have an alliance, which is called the Wellbeing Economy Alliance, and one of their policies is the just transition. Both have regions which are dependent on fossil fuels; in Scotland it’s Aberdeen, and in New Zealand, it’s Taranaki. So my research looks at the history of oil in both countries, and I look at the development of the fossil fuel economy and the transition from that into renewable energies.

So it’s interesting to be back home while the climate change conference is on! All the key stakeholders are here; people from unions, policymakers, civil society, organizations, NGOs, who all have a say in the just transition policy process.

Holly: Could you tell us a little bit about how you came to be a UBC delegate for COP26.

Max: UBC has eight delegate passes as part of the sustainability initiative, and I applied through that. It’s a mixed delegation from around UBC, so there’s an oceanographer, some legal scholars, a person from political science and we have a media colleague as well. So it’s a good mix of people. We’re split over the two weeks of the conference; so four delegates for the first week, and four the second week.

During the first week, I wasn’t in COP, so I spent a lot of time in the city and around the demonstrations and fringe events. There was the Fridays for the Future march, which was a school strike, so there were a lot of young people out that day. Then on Saturday, there was a massive demonstration where there were over 100,000 people. I’ve never seen Glasgow like it. The city has a rich history of political demonstration, and it’s also the heart of the Industrial Revolution, so it’s definitely an interesting city to host the COP. But I haven’t felt energy like that in the city before. 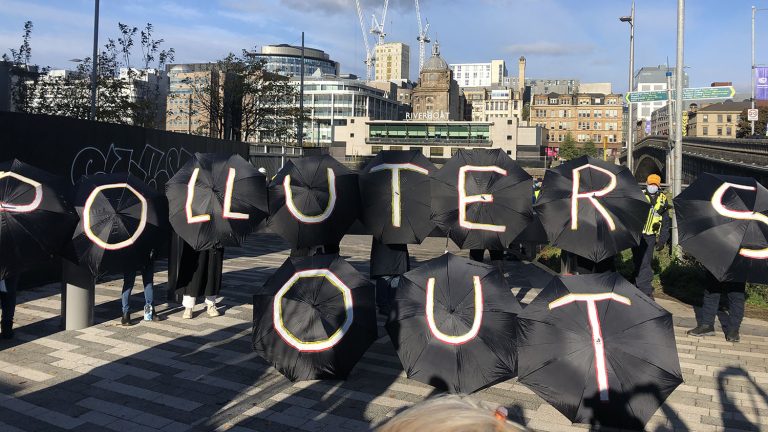 Holly: What is your overall impression of how the conference has been going?

Max: It’s been a bit up and down, I think. There are moments in there where you have hope that they’ll be able to come to an ambitious agreement that works for NGOs, civil society Indigenous communities, and people who are experiencing climate change at the sharp edge, predominantly from countries in the Global South as well.

This COP has been notorious for being the most exclusionary COP in history, partly to do with UK government mismanagement of organising it, partly due to logistical barriers and economic barriers that people have faced, and also COVID as well. So that has been very apparent in the conference; that it’s dominated by global north countries, those with the most historic responsibility, but also a lot of fossil fuel lobbyists. I think they actually outnumber the representatives from Brazil, which has the largest country delegation, so there were over 500 lobbyists associated with fossil fuel.

It’s an interesting conference as well, because there are the high-level negotiations going on, and also the side events. When I first arrived, I went to these side events in what’s called the blue zone. They’re amazing, because they’re full of academics, NGOs and think tanks, all presenting different elements of their research on what governments and businesses need to be doing to reach the 1.5 degree target. That target was set in Paris, as an ambition, and currently we’re at 1.2 degrees of warming. So we’re getting close to 1.5.

But it feels like there’s a break between the blue zone events, and the high level negotiations. It feels like the science that’s going on here isn’t really reaching through to the politics. Somebody could come out thinking “that was really interesting!”, but the politicians aren’t really listening to it.

But there are days when I feel a bit more optimistic. The Danish government and the Costa Rican government started a Beyond Oil and Gas Alliance, and 13 countries joined to set an end date on exploration for further fossil fuels. So that was a really good initiative that was interesting to follow. 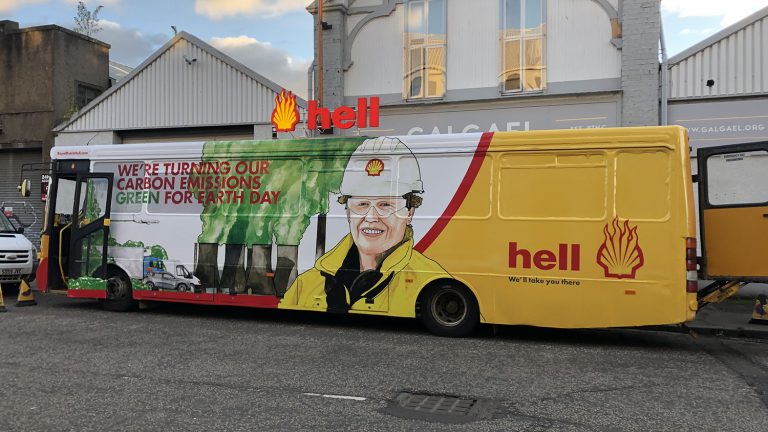 Holly: I’m glad that there are some elements of hope as well! What is one takeaway message that you would want to share with geography students or the UBC community, based on what you have seen and learned throughout the conference?

Max: I think the youth strikes were one of the most exciting parts. I’ll be honest, I actually had more hope and more excitement going out in the streets than I had going into COP. The youth protests are one of the most exciting things that I’ve experienced. There were kids from school, who were under 10 years old, all coming in with their banners.

Geography is obviously a renowned department for being so politically active and for putting climate justice at the centre of a lot of research. So I’d say to people there that to continue that work would be amazing. If you’re doing research on climate justice, find out what other people are doing as well, because there are a lot of interconnected struggles and topics of interest. I’ve met a lot of people in different departments, like legal departments, and political scientists who are doing quite interesting research on fossil fuels as well. So reach out to other departments, and then try and build support to put climate justice at the centre of research.

Holly: Would you say you’re encouraged from what you’ve seen at COP? Do you have any concerns going forward or near the end of the conference?

Max: So there’s a body called the United Nations Environment Programme and they produce the Production Gap Report, which shows the discrepancy between the government’s planned emissions and what the temperature will be as a result of that — and whether they’ll make it below 1.5 degrees. I think the last projection I read was between 2.4 and 2.7 degrees. NGOs and Indigenous communities and people from the Global South have been saying that essentially anything above two degrees is a death sentence for a lot of people.

There’s a lot of anger over the rhetoric of what goes on. Greta famously called it the “blah, blah, blah.” And there’s been a lot of talk like that. But when you’re sitting, listening to the science of researchers, and then watching what the politicians are saying in response, it’s quite disheartening.

At the same time, a lot of those struggles that are going on outside of COP and inside of COP have been quite inspirational as well. So hopefully we can continue the pressure on governments to accelerate their decarbonizing efforts.

An interview with Olav Slaymaker 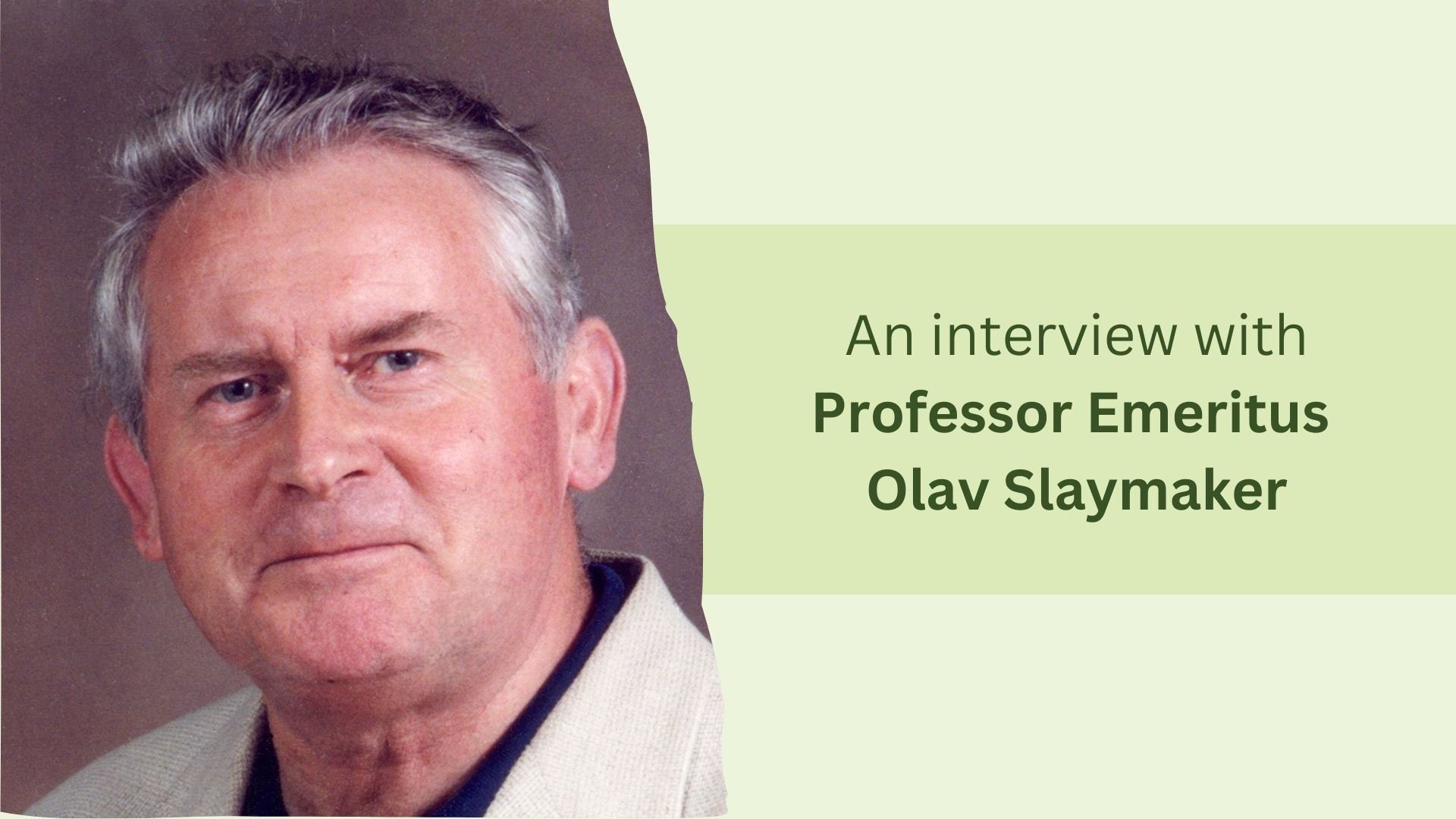 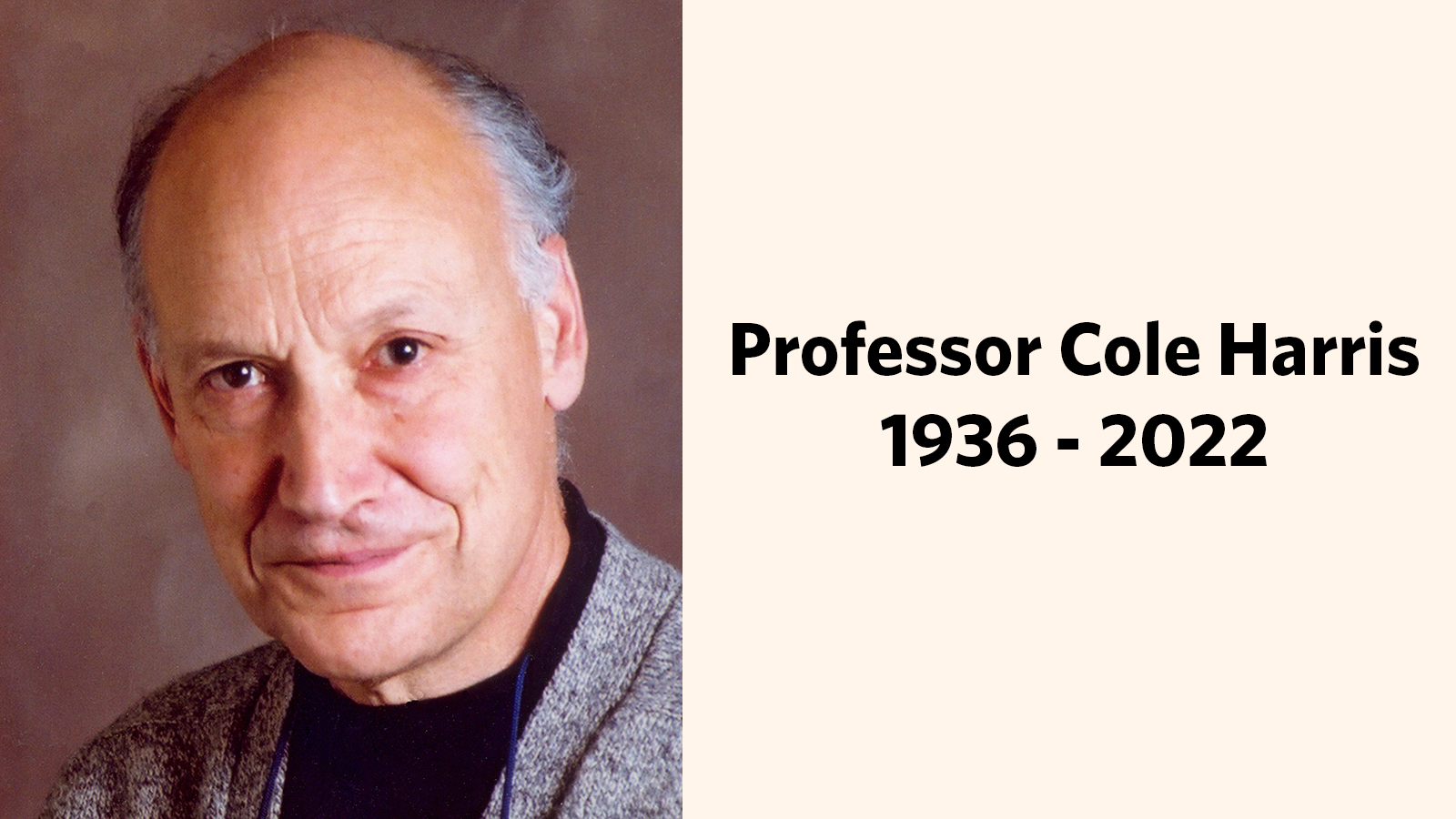 The benefits of blended learning at UBC 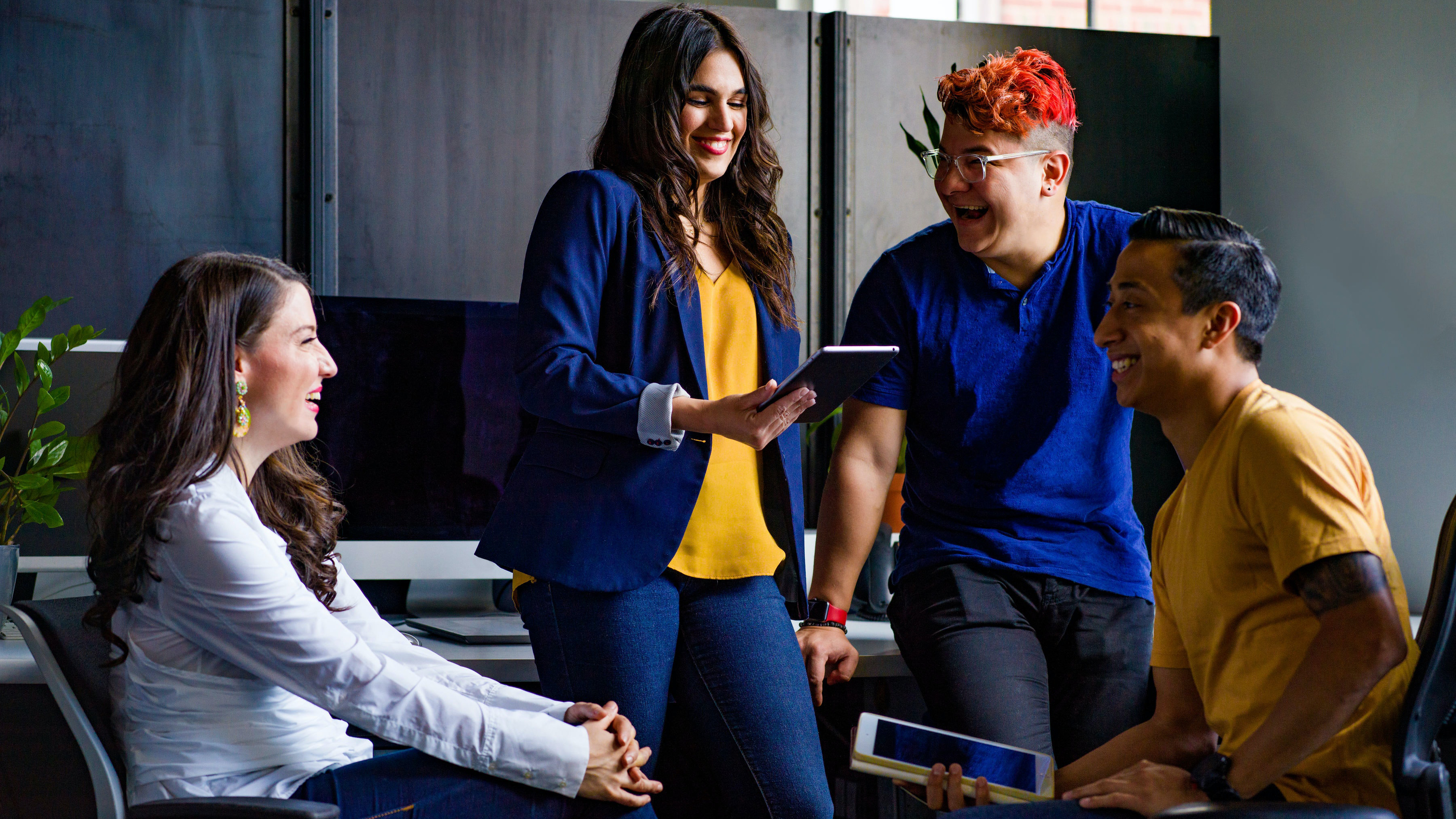